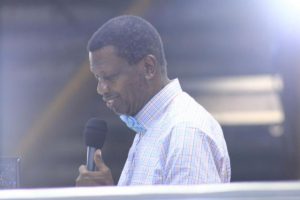 “I have to put it carefully so I am not misunderstood,” he said, “Many people will wake up to realise that their future is not in the hand of any government and as a result a lot of lost ground will be reclaimed.”

Pastor Adeboye Prophecies For 2018 Is As follows

Saboteurs who pretend to be friends will be disgraced and displaced.

There will be record-breaking temperatures both high and low.

There will be a handful of breakthroughs, both scientific and medical.

Global warming, sexual perversion and others that signal the countdown to the end.

There will be misunderstandings amongst nation but no major wars.

There is the need for prayers against assassination attempts globally.

“It is one thing to be victorious and another thing to possess it,” he challenged members of the church, and Christians in general, to possess their victories and live them with boldness and thanksgiving.

The congregation welcomed the new year with loud noise, jubilations and prayers from different angles in the camp, some had to go on their kneels while some were busy rolling in admiration to God for making them witness the new year 2018

Starting with the first Holy Ghost congress in 2018, Pastor Adeboye revealed that the church is going to take the battle to the enemy in 2018

Latest posts by admin (see all)